My friend Perry Marshall is a fountain of such wisdom.

He has a knack for saying things that make complex stuff clear.

What he’s talking about is how he is world famous for being The Adwords Guy.

In fact he’s the world’s most-quoted consultant on Google advertising.

If you ever set out to learn about using Pay Per Click (PPC) advertising online… you will come across Planet Perry.

He was the first guy to teach about how to use Adwords as a way to get traffic to your website when Google first rolled out the program.

I was one of the first to buy his course.

When I still did Adwords for clients, his course made me look like a freaking genius.

Perry also taught people how to use time tested Direct Response Marketing principles so your ads attract people who are interested and ready to buy.

Being ‘pigeonholed’ as the Adwords Guy has been the BEST thing that ever happened to Perry.

It has made him the Go-To Expert in online advertising.

But… and this is VERY important… he is not stuck only doing adwords!

Fact is, the adwords niche is at most 25% of his business.

He does copywriting, coaching, & consulting. He teaches about conversion and using offline marketing methods.

In short, he gets to do all kinds of other fun, cool stuff!

Being ‘pigeonholed’ has allowed all of the other opportunities to happen.

Funny part is this, by his own admission he had to be dragged kicking & screaming into the role of  The Adwords Guy.

And, he is eternally grateful to Ken McCarthy and some of other smart folks for badgering him to do it.

There are lots of marketing gooroos, but there is only ONE Perry Marshall Adwords Expert.

And it’s been worth well over a million dollars to him and his family.

Or as Richard Nongard likes to say…

“When you Niche Down, you Get Rich!”

I HIGHLY recommend you grab a copy of Perry’s
book “Ultimate Guide to Google AdWords”.

It’s not just a book on adwords, it’s an excellent
book on how to market online. 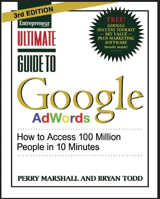 Hypnosis is increasingly being used by Fortune 500 companies as part of their Focus Group research...