Ever touched a shark?

I have. And I’ve done what some people would think is freaking crazy.

I grabbed one by the tail once and yanked it out of the hole it was resting in.

Now this wasn’t a Great White, Tiger Shark, or Hammerhead. All of which are dangerous creatures.

And it wasn’t a Mako, Bull Shark, or Black Tip Shark. All of which are more common where I was diving (Florida Keys), and all of which are also dangerous.

This was a Nurse Shark. (see photo)

Which has a rather small mouth. At least for a shark. 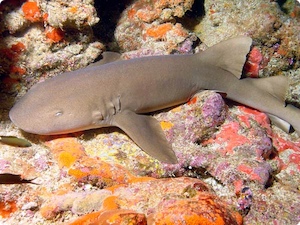 Nurse sharks are slow-moving bottom-dwellers and are, for the most part, harmless to humans.

However they will bite defensively if stepped on or bothered by divers who assume they’re docile.

So it was a calculated risk. (Though my mom did not agree.)

My friend the shark was in a big hole in the bottom that was filled with Lobster!

It was as we would say… A Lobster Bonanza.

But sticking my hand in front of the shark and wrestling lobsters out of their ledge was a guaranteed way to get a shark bite.

And there was no way I was leaving without my bag full.

So a quick yank of the tail and one surprised shark went zooming off for a safer spot to snooze.

Now what has this got to do with Marketing?

If you want people to read/watch/listen to your marketing copy, you need good headlines.

And I freely admit I ‘stole’ the headline from an article about another diver who did PUNCH a shark.

I Punched a Shark

I spotted this headline in the news and had to read the story.

After all, those of us who have had hands-on shark encounters are a very small group.

And it inspired this email as a teaching story.

We humans love stories. We are wired for them. It’s how most of human knowledge was passed down before we could “Google” it.

The story is a much better way show you about using storytelling, than trying to logic you about it.

You might even pass this story on. About a guy crazy enough to yank a shark’s tail.

Who knows… you might even use it in your marketing.

As a rule I don’t carry business cards**. When people ask me for one they are shocked. They...

Most Burning Question:  What is the best combination of easy understand-ability / clarity of...

Hi Craig, You really over deliver, both in your website and everything you do! I was not expecting...

This is a 10-minute video featuring the legendary direct marketer Jay Abraham. In this video Jay...

I have my own opinions about these long sales letters. Personally, I just dont spend time to read...

If you don’t know who Gary Halbert is, and you are learning how to market your...