This is one of the most inspiring video’s I’ve ever seen. Randy Pausch was a professor at Carnegie Mellon University where they have a tradition called “The Last Lecture”, which is the lecture you would give if you knew you were about to die. 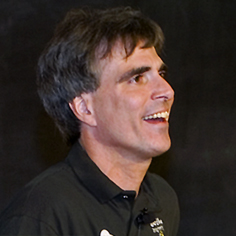 In his case, it was very real… he knew he had terminal cancer in his pancreas, and he gave this amazing lecture and had it recorded on video and uploaded to YouTube. It has been viewed 4,031,952 times. In other words, it went viral simply by word of mouth.

Randy Pausch just passed away two days ago. To honor him and his dream of helping as many people realize their childhood dreams, I am placing these two videos on my blog and encouraging you to watch them.

The first is the full Last Lecture. It’s 76 minutes and 26 seconds long. Worth every minute. But I realize not everyone has the time. So I’ve also included a link to the shorter version when he appeared on Oprah. It’s 10 minutes and 10 seconds.

Here are a few the gems he passes on:

Be sure to pass this on to others after you watch it.